The Direct Project aims to replace mail and fax as the current standard of communication between providers and organizations. It has been adopted by ONC as a requirement in 2014 Edition Meaningful Use measures 170.314(b)(1) & (2) and (e)(1). "The Direct Project specifies a simple, secure, scalable, standards-based way for participants to send encrypted health information directly to known, trusted recipients over the internet."

The C# Reference Implementation runs on Windows Server 2008 R2. It uses SQL Server, IIS, and SMTP Server. It is written mostly using .Net 3.5. It includes all of the components necessary to create a basic reference setup including domain and email address management, as well as a DNS server.

Running the Reference Implementation installer and choosing the Gateway Install will install all of the software components necessary for a complete Direct implementation on a single machine. It will include sample domains, email address, trust anchors, and certificates. The gateway installer will not send direct messages out onto the internet without some configuration; but properly configured, can do so, serving as a complete HISP in a box or as an extension of EMR software.

Instructions for preparing a machine for Direct can be found here and instructions for installing the binaries are located here. If you are still new to the Direct Project, you are probably going to perform a "Developer Install". This installs all of the components on a single machine, but more importantly it will provide you with two example domains preloaded with a trust anchors, certificates and email addresses.
The basic install procedure is mostly straightforward with one caveat. The Developer Gateway Install assumes you are using SqlExpress. My suggestion is to install SqlExpress for this purpose or contact DHIT for assistance.

Where to go for help

The importance of Project Management in an HL7 Interface Development project

This is part one of a two-part series, in which I’ll extol the virtues and considerations of project management in the world of interface development.  These are simply practical and day-to-day observations I’ve made after 6+ years in the trade. Part two to come in August 2013 and will be called: Tools of a Project Manager

Whether it is a large project, or just one ADT thread, the most efficient and successful projects usually involve someone who takes on the role of Project Manager (aka PM).

The players in an interface project will usually consist of:
A diagram of this scenario would be: 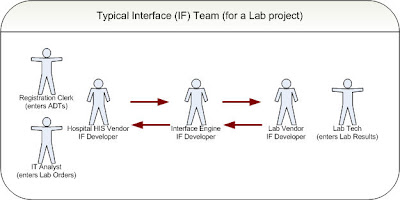 Sometimes one of the Vendors assigns a dedicated PM to the project, but that is a rarity.

Interface development is such a niche that it is not common to find a PM within the hospital who is familiar with all of the steps involved in an interface project and who also has the time to dive into the project.

I find that a good description for this type of project management is fluid project management as compared to rigid project management. In these types of projects the team must be very flexible because it's a small team and most team members have multiple responsibilities within their workplace. Because Patient Care comes first and issues often arise, the projects can be sidelined due to people on the project being called away.  Even scheduled go-live dates can change at the last minute, although that is not common.

The person in the PM role must be able to:

How does this take place?

An experienced Project Manager is able to:

There are times when a project is abandoned due to lack of project management.  All members of the team and the client are always grateful when the project moves and a successful outcome is achieved, despite roadblocks and technical issues which may arise.  Those roadblocks and technical issues can be project-killers without someone moving things along.

Healthcare management and teams truly appreciate not having to worry about how their interface projects are progressing, and Project Management can make that happen.

Different types of projects you may encounter:

All of these projects greatly benefit from effective Project Management.  They can all be done without it, but... wow, the difference is profound.

Connie Zimmermann’s primary ‘hats’ are as an HL7 interface developer for HL7Connect and Cloverleaf and a trainer for HL7Connect.  She has been a happy member of the Dynamic Health IT team since 2004.

Dynamic Health IT offers Interface Development and Consulting for many popular interface engines, as well as Bolt-On tools for HITECH/ONC 2011 Edition and 2014 Edition Certification for hospitals and vendors. DHIT's ConnectEHR software was the first 2014 Edition product certified through ICSA Labs.
Posted by Unknown at 1:14 PM 6 comments:

The Infor (formerly Lawson, formerly Healthvision, formerly…) folks have given us some nice enhancements to the alert functionality starting with version 5.8 of Cloverleaf (what I’m describing here is based on Windows version 5.8.5).

In recent memory, Cloverleaf has been able to automatically generate alerts under a variety of scenarios. Unfortunately, the built-in alert actions that displayed a message on the console or placed a message in the log/error files were not terribly useful. Sending automatic emails on Windows was challenging. The latest Cloverleaf makes the emailing much easier and adds some useful functionality.

To assist with automatic email alerts, there’s a tool under Options, Site Options, Alert Configuration. It enables you to test connectivity with your mail server. The only gotcha with this is that when we ran the test, it told us the test had completed successfully but when we tried the alerts, the email didn’t go through. We had to change the settings on our Exchange connector to allow for unauthenticated or anonymous connections from the Cloverleaf server.

Fittingly enough, the default file for the alert configuration is called “default.alrt”. You can change this under the “Site Daemons” by using the “Alert Cfg” button but I’ve never bothered with that. I have a feeling that if you did change it, you’d have to restart the Monitor Daemon for it to take effect. Unlike other configuration settings in Cloverleaf, the alerts take effect as soon as you save the alert file. Not like the NetConfig, where you have to bounce a thread or process for it to become active.

There is a file called “alerts.log” that is useful for troubleshooting. Cloverleaf adds an entry to this file each time an alert fires. This file is in your site directory under exec\hcimonitord.

Here is an example of an outbound queue depth alert that will notify us when two or more messages have been queued up for at least a minute: 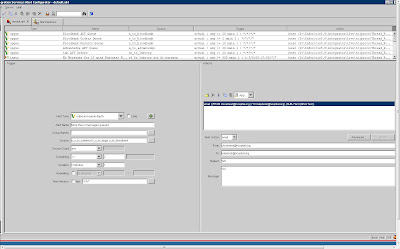 Here are guidelines for setting up some of the common alerts:


The Alert Time Window used to have some “gotchas but now they’ve reworked it, so you don’t have to remember that 0 means Sunday. 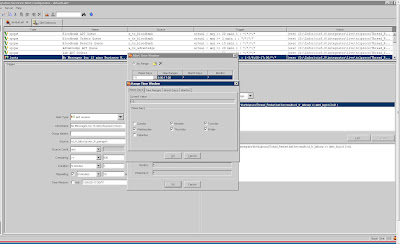 The screen shot above shows an example of stopping and restarting a thread automatically. Thread_Restart.bat is a generic .bat file I created that allows us to pass the site, process and thread names so it can be reused. Contact me if you’d like a copy of the file by calling:

Table 5 in the HITECH Final Rule states the following for MU Stage 1 or MU Stage 2 in 2014:

All EPs, EHs, and CAHs must have EHR technology certified to the 2014 Edition EHR certification criteria that meets the Base EHR definition and would support the objectives, measures, and their ability to successfully report the CQMs, for the MU stage that they seek to achieve.

All EPs, EHs and CAHs must also report on 2014 Clinical Quality Measures beginning in 2014.
Posted by Renee Martin at 1:52 PM 11 comments: