Wave Seven of the 2014 Edition Draft Test Methods were released on November 8, 2012.  Public commenting on this wave is two weeks after the posting date.

To review this Wave and all prior Waves of Test Methods click here.

Contact Dynamic Health IT if you need assistance with  your Stage 1 or Stage 2 HITECH Certification! 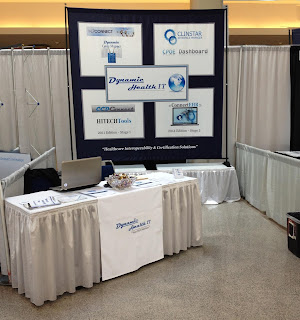 Dynamic Health IT exhibited at the Louisiana HIMSS conference in Baton Rouge Friday, November 9, 2012.  The event featured a number of informative speakers and vendor exhibitions.  Events sponsored by local chapters of HIMSS are a great way to meet and network with local people in the Health IT industry.

The 2013 National HIMSS Conference and Exhibition is in New Orleans, Louisiana from March 3rd through 7th.  Visit Dynamic Health IT in Booth 4219 to check out our applications and products.

Contact us if you need any help with system integration or HITECH Certification.

Now that the 2014 Edition Stage 2 Final Rule has been released, Dynamic Health IT has been hard at work designing and developing our new ConnectEHR product. ConnectEHR will be a web-based application with a number of supporting DLL's and Services which work with the application to deliver the functionality.  This application will be tested for a number of the interoperability modules in Stage 2 of HITECH Certification.

The following are the modules ConnectEHR is designed to meet:

Our challenge when designing this application was to develop a user-friendly, certifiable solution that could be easily integrated with our client’s systems to meet 2014 Edition Certification. It had to be compatible with EHR’s running on many different technology platforms. Also, DHIT wanted to ensure that the combination of base EHR plus ConnectEHR would provide a seamless user experience and not degrade workflow or require extraneous screens or keystrokes. We wanted to make sure that the combined EHR package would please end users as well as meeting HITECH requirements.

DHIT plans to certify ConnectEHR with an ONC-Authorized Certification Body (ONC-ACB) after the first of the year.

Posted by Renee Martin at 1:50 PM No comments:

ONC has announced that ATCBs can accept contracts to certify for HITECH Stage 1 up until fiscal year 2014, which starts 10/1/2013 for hospitals and 1/1/2014 for eligible professionals.

ATCB contracts that are executed prior to the Stage 2 Final Rule effective date (October 3, 2012) will still be able to certify to the Temporary Certification Program Requirements.   However, if you sign a contract with an ATCB to certify on Stage 1 after the Stage 2 Final Rule effective date, you will be held to the Permanent Certification Program Requirements which include price transparency, public test results, etc.

So, if you still need to certify your EHR on Stage 1 and you want to test under the Temporary Certification Program Requirements, sign up with an ATCB before October 3rd!

Contact Dynamic Health IT if you need assistance with  your Stage 1 or Stage 2 certification!

The Stage 2 Final Rule will be published 9/4/2012 according to The Office of the Federal Register's Public Inspection Desk.  Generally, the Final Rule is effective 30 days after the publish date, which, in this case, would be 10/4/2012.  It is on this date that the Stage 1 Certification Program will sunset meaning that ATCB's can no longer accept requests to certify systems on Stage 1 and anyone who has signed up with an ATCB to certify their system on Stage 1 will have 6 months to complete this certification.

If you still need to certify you system on Stage 1, sign up with a Proctor soon!

Contact Dynamic Health IT if you need assistance with your Stage 1 or Stage 2 certification!

Stage 1 - There is still time!

If you want to certify your system on Stage 1 of HITECH Certification, there is still time!

The Office of the Federal Register's Public Inspection Desk states that the CMS Final Rule (MU Incentives) is set to be published on 9/4/12.  There is currently no date listed for the ONC Final Rule (Certification).

Contact Dynamic Health IT if you need assistance with your Stage 1 or Stage 2 certification!

It is time to gear up for Stage 2 of Meaningful Use!

The Meaningful Use Stage 2 Final Rule was released today.  ONC has released a number of helpful documents which can be accessed here.

Contact Dynamic Health IT if you need assistance with  your Stage 1 or Stage 2 certification!


Posted by Renee Martin at 7:18 PM No comments:

CMS is expecting to release the Stage 2 Final Rule in early September.

See this article for further details:

http://www.hitechanswers.net/cms-gives-timing-on-release-of-stage-2-meaningful-use-rule/
Posted by Renee Martin at 12:33 PM No comments:

Mapping codes from one system to another can be a big job, and not a pleasant one!

Many of our clients face a long, tedious process of mapping codes from one system to another. For example, LabCorp and Quest , the two major reference labs both require orders to be submitted with proprietary codes unlike those used elsewhere.

Our challenge was to develop and deploy a user‐friendly but powerful tool to automate as much of the time‐consuming mapping process as possible while ensuring maximum accuracy.

First, we developed a traditional Windows application to be used on a local PC for code mapping and that was successful in pilot testing.

Next we developed our optimal solution which is a web-based application that provides easy access and collaboration in a multi‐user environment, while at the same time eliminates the need to install software locally and avoids deployment and installation issues.

The web‐based version is available via subscription and is offered for a limited time with a one month free trial.

With the Dynamic Code Mapper the dread of matching codes and descriptions is now a task that can be confidently accomplished with ease and efficiency.

Features of the Dynamic Code Mapper:
Click here to read our White Paper.

The Sun is Setting on the 2011 Edition HITECH Certification Program

Have you received your Stage 1 HITECH certification yet?  If not, you should sign up with an ONC Authorized Testing and Certification Body (ONC-ATCB) as soon as possible!

If you have received your Stage 1 HITECH Certification, there are a number of changes coming in Stage 2!

The new program introduces Gap Testing which will allow technology that was previously certified by the 2011 Edition to use the original certification results on criteria that is ‘unchanged’ in the 2014 Edition. This offers a less costly option for vendors and health providers who participated in Stage 1 certification.  It should be noted that if an outdated version of a standard was used during Stage 1 certification, the module must be retested with gap testing.  For example, if you used HL7 v2.3.1 during certification of 170.302(k) Submission to Immunization Registries, you would need to gap test this module and submit a HL7 v2.5.1 message.

The payment year schedule for Meaningful Use has also been shifted slightly by the 2014 Edition.  According the CMS Proposed Federal Register, an EP, eligible hospital, or CAH that became a meaningful user in 2011 or 2012 will begin their Stage 2 reporting period in 2014.  That means January 1, 2014 for EPs and October 1, 2013 for hospitals and CAHs.

Contact Dynamic Health IT at 504-309-9103 or sales@dynamichealthit.com for certification consulting or to set up a Gap Analysis of your system.

www.dynamichealthit.com
Posted by Renee Martin at 2:02 PM No comments: